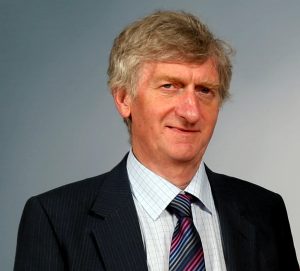 Graham’s usual role with Worcester Philharmonic is that of leader but his talents have often been called on as conductor and soloist too.

Graham and his mother played piano duets as soon as he could reach the piano, Graham just playing the one note – perfectly in time so he was told! His father sang in male voice choirs and his mother was an excellent pianist. His uncle, Eric Shrimpton, was a fine Hawaiian and Spanish guitarist, broadcasting weekly on the BBC in the 1930s.  At Junior school, Graham had an opportunity to learn the violin and at Redditch County High School music thrived – participation in the orchestras, conducting house choirs, directing music festivals, singing and playing in Gilbert and Sullivan productions all helped Graham to avoid PE!

He turned down a place to study violin at the Royal Manchester School of Music (now Royal Northern College) to follow a broader range of musical studies with William Matthias and Sebastian Forbes at the University College, Bangor, where his interest in conducting continued with guidance from the excellent conductor of several of the University’s ensembles, John Hywel.  As Head of Music at a couple of high schools, conducting school choirs, orchestras, bands and shows was a necessity. At this time he also conducted the Worcester G & S Society. As a peripatetic string teacher in Staffordshire, he conducted the local youth orchestra, leading to a post with the Centenary G & S Society with whom he produced several highly acclaimed performances. It was during a performance in Stoke that his eldest daughter was born. He ran straight from the hospital into the theatre orchestra pit, raised the baton and went at great speed, dashing from the pit as he conducted the final chord of the show to see his daughter. The opera was an excellent performance too!

As well as Worcester Philharmonic, Graham leads and has conducted the Redditch Orchestra and other ensembles. He is also a member of Volante Strings for whom he has made several musical arrangements. His violin was made in 1894 by Guilio Degani. It probably cost about £10 then! He still owns and uses several of his grandfather’s and great-grandfather’s woodworking tools dating from that same period when making furniture, but he will leave violin making to the experts!